Elephants play an important role in Nepal’s burgeoning tourist industry, and nowhere does that seem to be more evident than during Chitwan’s “International Elephant Race”. The title does not do full justice to the range of events involved in what is actually a three-day festival in which elephants play the starring role – participating not just in races but also beauty pageants and soccer matches. Elephants return with their trainers – known as mahouts – after collecting food from Chitwan National Park before the start of the first day of the race. The elephants that take part are tame animals, most of which are owned by the government, and which usually work carrying tourists through the park on safari. 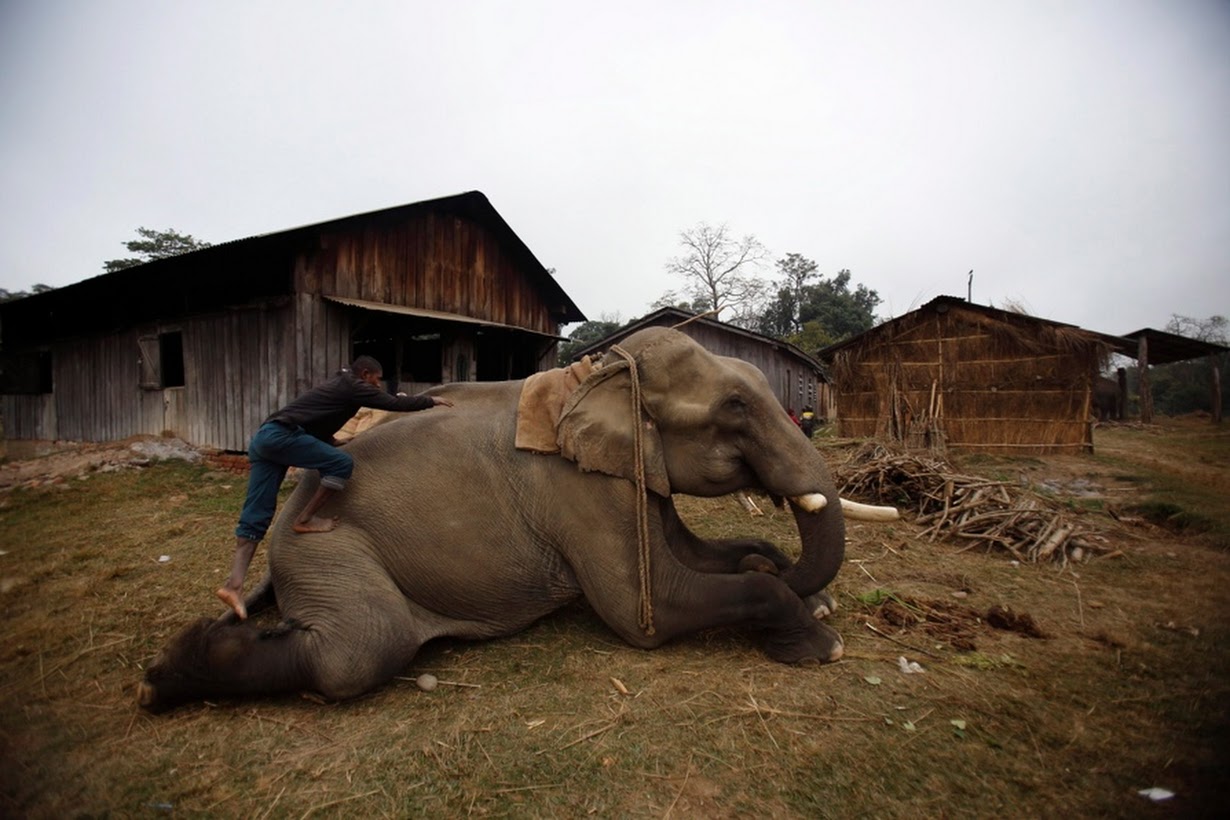 Each of the government-owned elephants has three mahouts to take care of it, and the trainers begin working with the animal when it is still very young so they normally develop a close relationship. 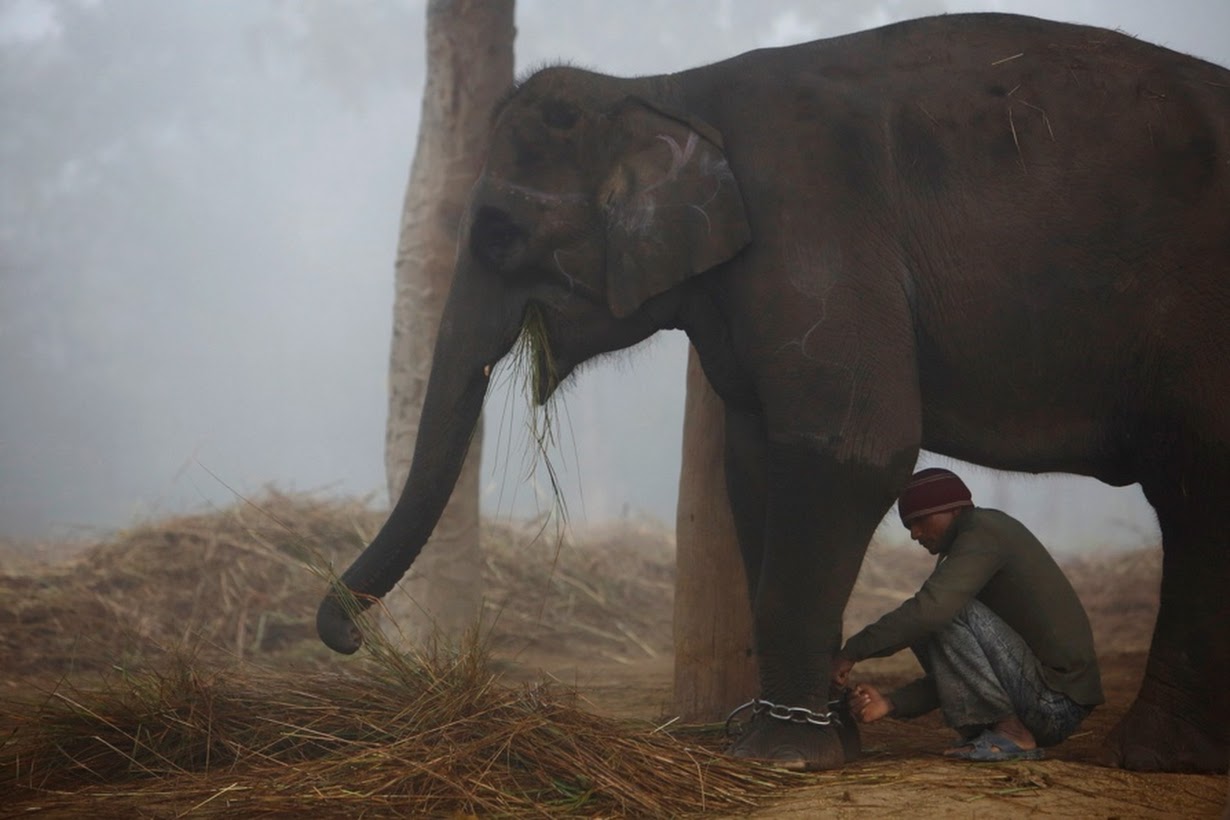 The Elephant Race offers a huge boost to the local tourist industry as money flows in with the national and international tourists who travel to see the events and local banks, hotels and other businesses sponsor the teams of elephants.

“It has to be said, elephants are not natural soccer players”NAVESH CHITRAKAR, REUTERS PHOTOGRAPHER

Chitwan’s International Elephant Race is a big deal. Big for the area’s tourism industry, big for the local community and big because of the size of its 5000 kg (70,000 lbs) participants.

In fact, the name is a bit misleading. First, the Chitwan’s International Elephant Race is not all that international: I saw one Australian guy participate, but most of the others taking part were locals. Secondly, it’s not really just a race: it’s a three-day festival that involves elephant racing, an elephant beauty contest, horse and ox-cart racing, and – probably most popular among the spectators – elephant soccer.

The event gets started with a procession by the local Tharu people. Lots of them come and participate, not least because it’s an important driver for the industry that many of them depend on for a living – tourism.

Normally, tourists come here to Chitwan to see the national park, which is one of the last remaining homes of the Bengal Tiger and the one-horned Asiatic rhino in the wild. Many of the park’s visitors go looking for these rare animals, and while they do so they often ride on the backs of tame elephants, most of which are owned by the government.

But if tourists were to come looking for one of these safaris during the Chitwan’s International Elephant Race, then they would probably be disappointed. The animals are almost all busy taking part in the festival.

During the event, the elephants go racing every day, and you can pay around $230 for the privilege of riding one as it competes. That doesn’t mean you’re driving the elephant– you’re just sitting behind the elephant’s trainer, known as a “mahout,” who does all the steering. You’d be lost if you tried to do it yourself!

There’s also a beauty contest, in which the animals are adorned with paint and jewelry and then ranked on the quality of their decorations and their skin. It’s traditional to decorate elephants a little bit, but what I saw was more elaborate that tradition demanded. In fact, some of the elephants looked very funny indeed and made people laugh.

The day is rounded off with a soccer match, in which around four elephants compete on each team. It has to be said, elephants are not natural soccer players; they simply do what they are directed to by their mahouts, and sometimes they even get tired of that. I saw one elephant get bored of following orders during the match, and simply pick up the ball and throw it off the pitch.

But although the elephants sometimes get frustrated with the finer points of soccer, the relationship between them and their mahouts is very close.

I really enjoyed seeing the trainers get their elephants ready in the morning, just like they would do any other day. There are normally three handlers per elephant, who wake up at 3 a.m. and collect their animal from the stable where it sleeps, then take it to the jungle to fetch food. After feeding their elephant, the mahouts have something to eat themselves, give their elephant a bath and get ready for their morning.

The elephants are paired with the mahouts when they are very young, and they can be very loyal to them – almost like a pet dog.

Yet although they are special one another, this isn’t just a domestic relationship. The mahouts are government employees and, for them, washing, feeding, and riding their elephant is a day at the office.

The Friendly Ika Couple Walked down the Aisle: Culture! Love Plus Fashion

PICS OF THE WEEK: YOUR BEST PHOTOS OF THE UAE

Google to allow removal of counterfeit goods from search results

The Friendly Ika Couple Walked down the Aisle: Culture! Love...

Are You Already Wearing the Hottest Brands in Your City?

See The Village in India Where Clean Living Became a Tourist...